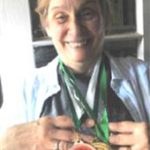 A World Champion in our midst : Karen Mc Callum in Australia

Bridge to the world
Karen on Worldbridge
System card with Lynn Baker 2015
How to Maximize your chances of winning by Karen Thomas McCallum PDF
Kate’s rules to live by courtesy of K.T. McCallum PDF
Bridge Judgment by Karen Mc Callum PDF
Two gentlewomen from Verona or … Rude and unpleasant behavior at the table is a perennial problem in tournament bridge by Karen McCallum PDF

Kate aka Karen is one of the finest bridge players in the world. She is well known for her
aggressive style as well as her well founded theories on the game. She was born in born in San Francisco and has confessed to being just into her sixties. She moved to New York City (Greenwich Village) in the early 1970’s and settled in an old white farmhouse in a tiny town in New Hampshire since the mid 1990’s. Even though I didn’t ask the question – my omission of course – she is happily married to the man of her dreams for 29 years.
When she was around 20 her first (short-lived) husband was a graduate student at Ohio State when she was a freshman (in those days it was probably a freshwoman). She was appropriately in awe of his Notre Dame credentials and his bridge prowess (which turned out to be nil, but what did she know at the time?).
He played nearly every night in their living room with 5 or 6 of his Notre Dame buddies so she pretty m
uch had to learn – or get rid of the husband (she did both!). The guys used to put her in the game occasionally when they needed a fourth, and then yell at her for everything she did. She learned perforce but resisted all the way hating it because of the behaviour (not much has changed there in 40 years)
Kate quit bridge again in 1972 and kibitzed for a few years when she moved to New York. She would have been terrified to play among the likes of Al Roth, Edgar Kaplan, B.J. Becker, Ira Rubin, Victor Mitchell, Tobias Stone, Sam Stayman among others especially as she was, by her standards, a novice. Although she knew the rudiments,

Matthew Granovetter really taught her the game during that time – so she regards him as her true teacher. She quit again in 2003 – because of the dreadful behaviour of the players but was dragged back kicking and screaming in 2006, by her « so-called » friends who say they couldn’t win without her – she admits to being subject to flattery every timeKate plays professionally 3 to 4 days a week and with that schedule doesn’t really have time for ‘social’ games but would in Australia where bridge is still fun.
Kate’s love of bridge is sparked by good opposition and/or fun people and learning – there’s always a new discovery .Kate is an avid reader of bridge books reading almost daily. She keeps books by Terence Reese next to her bed. Her most recent book was Krzysztof Martens – « Dynamic Declarer Play” while her favourite book is Victor Mollo’s « Confessions of an Addict ». She is very keen to play in a Bermuda Bowl (Open world Championship) but doesn’t think it will happen. She also wants to continue teaching and helping her students develop and hopefully win a world

championship with Lynn Baker, her friend and partner who has worked hard for it for many years.

Her most memorable bridge moment

was running 2nd place with one board to go in the London Sunday Times Invitational (1992) with Sally Brock.

In a star-studded field (she considered that they were the pigeons!), and never lying below 5th place throughout the event they faced Boris Shapiro and Irving Gordon (Haggis) who bid a terrible grand slam against them on the last board (on a bidding misunderstanding!). Their trump suit was
AQJ53 facing T64. Haggis made it with good card reading – used his only entry to play low toward the AQJ53 and picked up her singleton King. (As usual, she had done too much advertising in the bidding to make this a distinct possibility!) They lost 200+ IMPs across the field (the biggest loss suffered by any pair in the entire event), and ended up 10th. But
it was a moment…

What makes Kate a good player and good partner?

Tenacity and Workaholism (her word). She never gives up, not even when they are getting buried. Her strength lies in competitive bidding and weakness definitely in declarer play. She confesses to being a terrible partner, too critical and too much of a perfectionist. But she loves her regular partners dearly (Lynn Baker,

Kerri Sanborn and Matthew Granovetter) so she works very hard on controlling her
weaknesses – but, as she says “they keep coming back so I must be somewhat successful in communicating to them that it’s not the sort of partner I want to be.” Strong influences on her game have been: Victor Mollo, Matthew Granovetter, Kit Woolsey, Kerri Sanborn.

If she could play with anyone in the world it would be Zia but she’s done that. It’s so much fun that she doesn’t mind losing when she plays with him – and his bridge is highly entertaining as well. She describes him as creative, a perfect gentleman and very kind to opponents and while she has been lucky enough to play with most of the world’s best – Zia is a standout favourite.

EXETER – Karen McCallum has been out of town on business for the past several weeks. She’s a professional card player.Not the kind that might immediately come to mind, but a professional bridge player, and the 60-year-old Exeter woman has been at the World Bridge Championships in Italy.On June 12 at the Fiere convention center in Verona, « Kate » and teammate Matt Granovetter won the gold medal in the pairs competition. Her trophy will be added to the four other gold medals she’s received in world bridge tournaments.

In their 18th century home on Main Street, husband Alex McCallum showed off the old section of the house, previously used as a mechanics garage. Thousands of mystery books line the walls and a glass cabinet showcases the numerous awards she’s won in her more than 30 years playing the card game.Not only does she take home prize money and medals, but she is sponsored by other bridge players to compete on their teams.

Lynn Baker, a law professor and attorney from Texas, hired McCallum and a team to compete in this year’s tournament.In a phone interview as she and her team took a break from competition and traveled to Venice, Kate said her recent victory was exciting, but not like wins in the past.

On April 1, 2005, she went in to Exeter Hospital for a mammogram and nine days later she was diagnosed with breast cancer. She and doctors wasted no time and on April 14 she had a lumpectomy. Traces of cancer were found in her first lymph node, a sign that it was starting to spread.She was treated at Exeter Hospital with an aggressive approach. On May 10 she underwent a mastectomy. »I’m astounded by what a good hospital it is, » she said. « For a small town we have just remarkable people. »

As Kate talked about her treatment at Exeter Hospital, Alex let her know her surgeon called to congratulate her for the recent gold medal.In between the surgery and chemotherapy, she continued playing bridge and even joined a couple of tournaments, including one in Las Vegas.In June, after participating in a European championship, she returned home to undergo chemotherapy and would not compete again until March of this year. »My husband took good care of me, » she said, adding support from family and friends helped her through a very difficult time.Even though the treatment made her sick, only able to stomach Cup o’ Noodles and chocolate milkshakes, she found temporary relief in playing bridge on the Internet with others around the world. »Because of the Internet I was able to play online, » she said. « It was helpful because I found that for me, my way of dealing with difficulties is I can tune everything out and not think at all about how I feel and get on with what I do. When I was really sick, I could blot it out completely and sit on my computer and play bridge and almost pretend I didn’t feel so bad. »Through her treatment she lost 50 pounds and her long dark hair.The couple met in 1976 in New York City. At the time Kate had been playing bridge for a number of years with the country’s top players at clubs in the city. She moved from Ohio, where she got her start in the bridge world, to New York City in 1972. 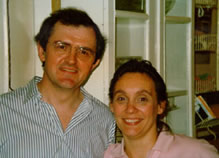 Alex McCallum is a British native and former Reuters financial correspondent who now runs his own financial public relations firm. The couple married in 1979.In her 30 years as a tournament bridge player she has taken home several prestigious awards. She represents the United States and usually plays in women’s tournaments but often participates in world championships. She was a member of the women’s national team that won world championships in Australia in 1989 and Chile in 1991. She won the world pairs championships in Geneva and Montreal.Her recent gold medal will soon be placed in the same glass cabinet where four others rest. But the win, in comparison to her victory against breast cancer, seems a little less important than previous wins. »Truth is, it seems rather unimportant now, but my perspective is so different, » she said. « For me, it’s funny, life has changed. Winning a big tournament suddenly doesn’t matter.It’s more being here, being with people I care about. When faced with something more life threatening, all of the sudden what becomes more important is family and friends – winning a bridge tournament suddenly doesn’t seem as important. » 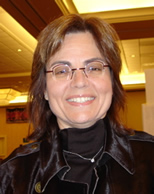 Kate has played regularly with Lynn Baker for many years, and has agreed to share 13 of their favourite agreements
1. POINTS DON’T TAKE TRICKS.
You can take tricks with high cards: aces, kings and queens, etc. You can take tricks by trumping.You can develop a long suit for tricks. The better your hand fits with partner’s, the more tricks you will be able to take by ruffing in one hand, or both. You can even take tricks on power with 7’s and 8’s sometimes – when all the high cards are played on one or two early tricks in a suit. But in all the years I have played bridge I have never seen a point take a trick! Stop relying on the high-card point count as your only, or primary, guide to the value of your hand.Look at your hand’s trick-taking po 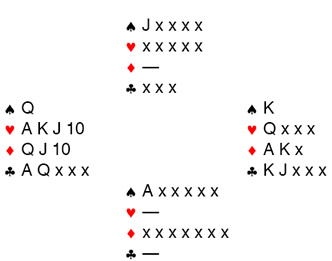 tential. Look at the degree of fit with partner, at the spot cards, at the positional value of your cards (are your kings behind their aces, does it look like the finesses are onside for you, or offside?). Look at your stoppers in their suits. Of course, high-card points can also be a useful guide to the value of your hand, particularly on balanced hands. It’s hard to make 3NT with two balanced hands unless you have something pretty close to the old- fashioned Goren requirement of 26 points. But you can take a whole lot of tricks, with very few HCPs, when your hands are unbalanced. You can count your high-card points if you want to (I don’t unless my hand is balanced), but make that only one of many factors you consider in your bidding decisions. Example: Here’s a five-point grand slam, admittedly not so easy to reach.
Six clubs is a great slam East-West, but goes down because of a diamond ruff or two. Meanwhile,
7♠ is cold the other way!