Article Published in Bulletin n° 8 NABC Dallas 2006
Thirty-eight years ago, two Texan bridge enthusiasts, one a businessman and the other a bridge expert, came up with an idea that was to change the face of bridge. They decided to create the world’s first professional team, with the express purpose of bringing the world title back to the United States. They chose the name Dallas Aces, which was later shortened to The Aces. The businessman was Ira Corn Jr., chief executive of Michigan General Corporation and a former assistant professor at Southern Methodist University.The player was Bobby Wolff, a bridge club owner and teacher from San Antonio.It all started with Corn who was inspired by what he saw in the 1964 World Team Olympiad in New York.

Corn had become interested in bridge and he traveled to the world championship to have closer look at the top players in the game. What he saw was the Italian Blue Team, a finely tuned bridge machine which dominated the field and defeated a strong American team in the final. Corn left New York with dreams of creating an American squad that could wrest the world championship from the seemingly invincible Italians. A couple of years later, he began work on the project.Together, Corn and Wolff invited other young stars to join them in Dallas to train as a team.Corn selected five players from among America’s leading young experts, agreeing to pay each a salary, plus tournament expenses, to undertake a fulltime career of studying and playing bridge 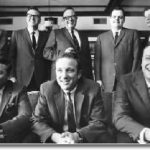 He invited: Bobby Goldman from Philadelphia; Mike Lawrence, Eddie Kantar and Bob Hamman from California; Billy Eisenberg from New York and Jim Jacoby, who was already in Dallas. Two of the initial invitees, Hamman and Kantar, turned Corn down. They were enjoying some success in their developing partnership and didn’t want to change. Furthermore, Hamman had misgivings about the whole idea. The other players may have also wondered whether they could make the project work, but theirdoubts were not strong enough to keep them from signing on as Dallas Aces. Wolff played with Jacoby. Eisenberg, Goldman and Lawrence played as a threesome. Progress for the Dallas Aces was slow at first. Practice sessions were often disorganized and partnerships lacked structure .

Then came Joe Musumeci, a retired U.S. Air Force officer, hired by Corn to shape up the troops. He ran disciplined, structured practice sessions and enforced Corn’s dictum that partnerships have firm bidding agreements. The team made its debut in 1968 and soon were the terrors of the bridge world. At the 1968 Summer NABC in Minneapolis, Eisenberg and Goldman won the Life Master Pairs. Wolff and Jacoby were second. Hamman took notice, and it wasn’t very long before he signed on with the Dallas Aces. He joined in January of 1969. The partnerships were now Goldman–Eisenberg, Wolff–Jacoby and Hamman–Lawrence. The Dallas Aces used a computer to analyze results and to generate specific sets of hands to provide practice in given areas of the game – slam hands, preemptive openings, etc. The use of a computer was a pioneer step. They were not available to the general public at that time. The Aces spent 50 to 60 hours a week perfecting the bidding systems and discussing problems encountered at the table. Complete records of all hands played were compiled for critical analysis.

Bridge players have big egos, but those egos had to be put aside.From the intensive study and analysis emerged various bidding styles including the Orange Club,used by Wolff and Jacoby; the similar Black Club, used by Hamman and Eisenberg; and the Aces Scientific system, used by Goldman and Lawrence. Besides competing in North American championships and regional knockout team contests, the Aces also engaged many of America’s top experts in practice matches in Dallas and staged a series of exhibition matches.By the following summer, the Aces had become a virtual steamroller in the bridge world. In the Spingold Knockout Teams at the 1969 Summer NABC in Coronado CA, the Aces won every match but the final by more than 100 IMPs. In the championship match, they pounded a strong team led by Ira Rubin, 211–116. The Aces stormed through the team trials later that year to earn a berth in the 1970 Bermuda Bowl in Stockholm, Sweden.

The Aces were so dominant that they had clinched victory before the final quarter of the championship match against Taiwan (that year scoring was by quarters with IMPs converted to Victory Points). The famed Italian Blue Team was missing, but that didn’t lessen their excitement.The next year, the Aces followed up with another convincing victory, this time over a strong French team in the Bermuda Bowl final in Taiwan. Up to now, the Aces were receiving a salary and expenses. Shortly after that tournament, the Aces were no longer Corn’s full-time employees, although he still paid some expenses for the team. For a long time, any team with Hamman and Wolff was known, unofficially at least, as the Aces. The makeup of the Aces began to change

In 1971, Eisenberg left the team and was replaced by Paul Soloway. In 1972, the Aces were runnerup to Italy in the Team Olympiad. Jacoby-Wolff played the Orange Club;Hamman-Soloway, the Green Club and Goldman-Lawrence, Standard American with special treatments. In early 1973, Soloway was replaced by Mark Blumenthal.

The Aces were second to Italy in the Bermuda Bowl, playing as two threesomes: Wolff- Hamman-Jacoby playing Aces Club and Goldman-Lawrence-Blumenthal playing Standard American with special treatments. Soon thereafter Lawrence and Jacoby left the team and were replaced by Eric Murray and Sami Kehela. In 1974 the Aces were second to Italy with Hamman-Wolff playing the Aces Club, Blumenthal- Goldman, Aces Scientific, and Kehela-Murray, Colonial Acol. See the Video  Final Italy USA

In 1975 Eddie Kantar and John Swanson made their first appearances in international play with the Aces and Soloway-Eisenberg were back on the team. The Aces were second to Italy in the Bermuda Bowl and the team was Hamman-Wolff (Aces Club);Eisenberg-Kantar, Soloway-Swanson (Standard American with special treatments). In 1976 North America did not fare well in the Team Olympiad, but won the Bermuda Bowl. On the team were two former Aces — Soloway and Eisenberg. The Aces won the 1977 Bermuda Bowl as Zone 2 representatives, and another team from North America finished second. Playing for the Aces once again were Hamman-Wolff, Soloway-Swanson and Eisenberg-Kantar.In 1979 four ex-Aces won the Bermuda Bowl in Rio on a team captained by Malcolm Brachman(Eisenberg, Goldman, Kantar, Soloway). 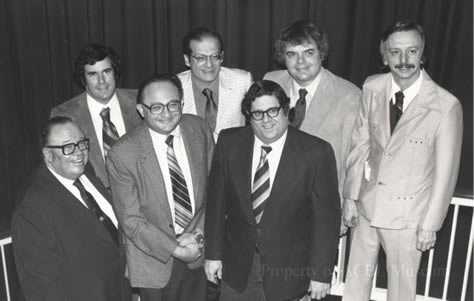 The next year, in the 1980 World Team Olympiad, Corn captained the Aces to second place behind France. His team was Hamman-Wolff, still playing the Aces Club; Soloway Ira Rubin (Standard American with special treatments) and Fred Hamilton-Mike Passell (five-card majors and 2/1 game force). In 1981 for the first time in many years no Ace or former Ace was present on the U.S. International Team. But in the fall of 1981 Corn put together one more Aces team. He had great hopes for Hamman- Wolff (the only players to remain constantly with the Aces throughout a 13year period), Alan Sontag-Peter Weichsel and Mike Becker-Ron Rubin. Corn died suddenly of a heart attack in April, 1982. Just three months later, the Aces won the Spingold in Albuquerque and qualified for the International Team Trials in Minneapolis that November. Hamman, in summing up the history and the victory of this Aces team, reported, “Just say that we won one for big Ira.” They also won the Minneapolis trials, with Musumeci as non playing captain. The team went on to win the Bermuda Bowl in 1983 in Stockholm, Sweden, and the team dedicated that victory to their former patron 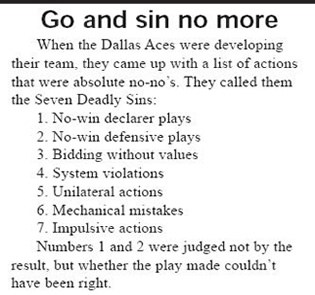