« Barry Crane was the best match point player ever. He didn’t just win countless match point events, he destroyed them. Just about every regional pairs event he entered he would finish about one board to two boards ahead of the second place finisher. «

« Won World Mixed Pair Bridge Championship with Kerri Shuman. Considered by many to be greatest matchpoint player that ever lived. »

Card sense is when it’s technically right to do something, the little man that sits on my shoulder or anyone else’s shoulder says, « Don’t do that. » And you say to yourself, « Well, wait a minute, that’s the right way to play. » And he says, « Yeah, but you don’t wanna play that way. » That instinct is card sense. It’s almost an ability to feel where the cards are. It’s something that you can’t buy, you can’t find; you’re born with it. The ability to do the right thing at the wrong time or really to do the wrong thing at the right time…     ~

Unlike many out door sports – foot ball, baseball, basket ball – the bridge world has not been constantly wracked by scandal. Compared to physical sports, it has a rather tame history. There have been some cheating scandals, but eventhose have been few and far between. However, there has been the occasional big story.Certainly the most sensational story of the modern bridge era was the brutal murder of top player BarryCrane in 1985.At the time of his death, Barry Crane was the top-ranked bridge player in the country and is of ten considered the greatest match point player of alltime. He passed the at-the-time un heard of 30,000 masterpoint mark at a Denver tournament in the early 1980s. An an nouncement was made and he took a bow.His table was always sur rounded by kibitzers.When Crane died, his closest competitor, Paul Soloway, was a distant more than 11,000 masterpoints behind. Soloway didn’t catch up until 1991, six years after Crane’s death.Crane was also a big name in Hollywood, a famous producer and director of a slew of hit shows including the popular “Mission Impossible” and “Dallas.” An exceedingly rich man, he rarely let his love of the game interfere with his work,but he could afford to fly long distances to tournaments on week ends just to play a day or two and then be back on the set Monday morn ing. Crane was a multiple winner of the American Contract Bridge League’s McKenney Trophy race for most masterpoints won in a single year, and he had hundreds of regional titles to his credit and dozens of national championships. The McKenney competition was renamed the Barry Crane Top 500 in his honor. Barry Crane was a regular at District 17 regional tournaments. The bad news was actually announced during a Denver sectional tournament in 1985 and came as a shock. Barry Crane had been blud geoned to death in his home. Robbery was apparently not a motive. To this day, the murde re mains unsolved. In any event, the bridge world lost one of its greatest and most colorful players. Barely a hand ful of Top 500 races since then have had the suspense, drama and interest that always seemed to be present when Barry Crane was going for the title…

Thanks for the Memories

As she moved from table to table and greeted new opponents each round in the Mixed Pairs in Verona, Kerri Sanborn could not help remembering her first world championship, 28 years ago and a continent away. It was 1978 in New Orleans, and Sanborn (then Shuman) flew in from Los Angeles to play in the Mixed Pairs with Barry Crane, a frequent partner in the U.S. and a player regarded by many as the all-time best pairs competitor. The two were dominant, winning the Mixed Pairs by about five boards (or tops) ahead of second place. It was thrilling for Sanborn just to take part in the world championship. « I was playing against people I had read about since I started playing bridge, » she says. Sanborn recalls that she knew she and Crane were having a good game in the world championship, « but I’m not a good estimator, » so she could go only by how the session felt. « Sometimes when you were playing with Barry it was like magic, » she says. « It’s hard to describe, but your karma was really pumped up. » The whole New Orleans trip was somewhat of a blur, Sanborn recalls – in and out in three days – and she didn’t play in another world championship until eight years later, when she and Bob Hamman sat down as partners in another Mixed Pairs (they were second). Sanborn says she was devastated when Crane was slain in 1985 during a bridge tournament in the Los Angeles area (the crime is still unsolved). She ended up filling in for her longtime partner in a knockout Crane’s team had been playing when he was killed. « It took a long time to get over it (Crane’s death), » she says. « I would walk into a room at a tournament and expect him to be there. I would think it was all a great, horrible hoax. » Reflecting on the differences between the bridge of today and at the time of her international debut, Sanborn says, « Bridge is a lot more sophisticated today, and a lot more people can play the game well. It’s also more of a business. »

Barry and Me by Cam French

Reason for Inspiration: Palm Springs Regional in Palm Springs, California, December 11-17, 2006 held at Westin Mission Hills Resort & Spa in Rancho Mirage, California
« ‘Tis midweek after Palm Springs
And the results are all scored.
They’re out there on the Internet
I know cuz over them I’ve poured.

I’ve hurt my eyes hunting
For someone named Barry.
Found a Barry named Crane.
(Thought he was long buried!)

But a Harper named Barry
I have yet to find.
Perhaps the field in the desert
Was just too much of a grind.

Here’s hoping the Harper one
Is feeling all right.
Be well for Santa
Since he comes in two nights.

And if you listen carefully
You’ll hear him exclaim:
Merry Christmas to Barry,
Bridge is only a game!! 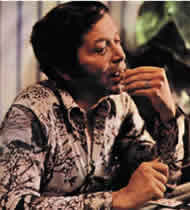